As computing evolves we work with bigger and bigger data sets and try to solve bigger and bigger problems. Traditional computers have limits. Could quantum computing be the gateway to unlock the future power we need to solve the biggest problems? We talked with Bill Phillips and Mohammad Hafezi about their work in this area and their desire to communicate these ideas to K-12 teachers, students, and counselors.

Question: How did you each get interested in quantum computing? 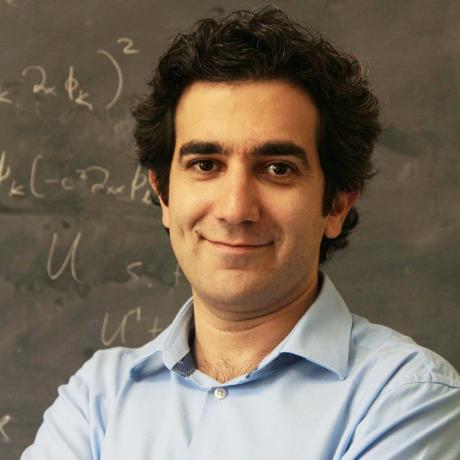 Dr. Hafezi discovered a strong interest in math as a student, but he found himself looking for something tangible to connect with. Although he liked the challenge of math, especially geometry, he wanted something concrete, something in the “real” world, not just equations. In Iran, he participated in inquiry education in his science classes to drive curiosity and innovation with experiments where students were asked to figure out the laws of physics from a demonstration before they were taught: ie: if we put salt on ice, why does it melt? This way of teaching motivated him to go beyond the classroom and to read and learn about new ways of doing things. Now, his research includes advances in nanophotonic devices that may transfer information with light instead of electricity in future circuits which opens up potential avenues for quantum information sciences. https://groups.jqi.umd.edu/hafezi/people

Dr. Phillips remembers developing an early interest in becoming a researcher when a 5th-grade teacher said that if you go to college and then continue on to graduate school you will write a thesis, and when you do that, you will write about something that nobody else has ever known. That seemed amazing. Bill believes that quantum computing is an area where you learn new things every day, and where there is so much to be discovered. Talking with him you can feel the joy of discovery, the satisfaction of working hard to solve complex problems, and the fascination with the possibilities yet to be uncovered. He received the 1997 Nobel Prize in Physics “for development of methods to cool and trap atoms with laser light.” and continues to contribute to the field in his current work in quantum. https://jqi.umd.edu/people/william-phillips

What do you want people to know about Quantum computing?

Quantum is the way the world works at the sub-microscopic level. If we didn’t understand quantum we wouldn’t have much of what is in our modern lives. For example, it's essential to all computers from the middle of the 20th century on.

Even a genius like Einstein thought that quantum couldn’t be true, it's so different from other kinds of science, and we are just now understanding how to put it to work.

Quantum connects to everything. Modern humans should have an appreciation of a wide variety of things such as abstract art, all kinds of music, and performing arts. Some of these things we may have to train ourselves to appreciate by building our understanding. Quantum is one of those things.  Some people say that quantum is just weird. But it is deliciously weird, not prohibitively weird. Even though it is so strange people can understand it, and people can harness the power of it.

Quantum computing is an avenue to discovering the joy of solving problems. You can actually learn how to enjoy something by working at it and getting good at it. Also, it's important to learn how to be a problem solver. Physicists are often recruited by management consulting firms because of their problem-solving abilities.

Be aware of the societal impact of quantum. Everything powerful can be used for good or for harm. Experts are raising ethical issues about the technology's potential to create new weapons and ramp up human genetic manipulation.

Computer science now has many different specializations even at the undergraduate level and it is connected to many other disciplines such as electrical engineering and physics. Quantum should be a part of all of these programs of study.

High school students can do meaningful projects in quantum computing using the IBM cloud with just a rudimentary understanding of physics. Bill and Mohammad are proposing a project for K-12 quantum education.

What is their advice to young people? Stay curious.

A short intro to quantum:

Ordinary computers use bits to store information using 0's and 1's, and combine those bits to represent every kind of number, picture, sound, and more that is stored and processed digitally. Quantum explores the space between 0 and 1. So, this means that a computer using qubits can store an enormous amount of information and uses less energy doing so than a classical computer. In this quantum area of computing, the traditional laws of physics no longer apply, and processors that are possibly millions of times faster than the ones we use today can be created. It sounds fantastic, but the challenge is that quantum computing is also incredibly complex.

Photo of Dr. Hafezi is from the Joint Quantum Institute https://groups.jqi.umd.edu/hafezi/people