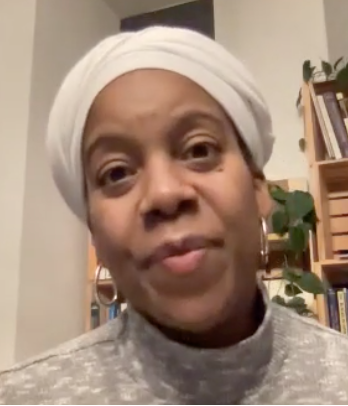 People often ask “How did you end up marrying French and Computer Science?” And I think to myself that it was like waking up one day and realizing I was married without ever having realized I had been engaged to begin with. That's how this journey started off for me.

I started teaching French online back in 2006. The interesting thing was that the platform we were using to teach on, Blackboard, had no audio or visual tools. So, everyone who taught world languages or speech… well, we were speechless, literally and figuratively! We wondered, “How do we teach?”.

So, after straining my voice from having called every student on the phone. I said, there must be another way. I started developing tools, and I got further and further into technology because I had to do it all online. That was not one of my original interests at all; I was just driven to find a way to communicate with the students, and that led to getting deeper and deeper into technology. Shortly after that, I started a translation company which introduced me to machine learning and natural language processing, both of which are parts of Artificial Intelligence. If you had asked me, I would have said “Oh no! I don’t do computers!” At that point, my work really did not look anything like a marriage of world language and computing.

When I moved to North Carolina, I became fascinated with the digital humanities. There was an opportunity to work with a group of professors in the area at Duke,  North Carolina State, and UNC. We were all learning together, and it was such fun being in this collaboration. Much of the time we would start out being completely lost together, but then we would come out on the other end with more understanding. Everyone was in different disciplines in the humanities, so there were many different perspectives. Something lit up inside of me, and I said, “Oh, I think I see where we can maybe date.” There were interesting ideas about bringing the humanities and computing together… but I still wasn’t looking at myself as a person who would actively incorporate this into my class, but over time it did.

When I moved to Maryland, and I discovered the MCCE, I craved that interesting interaction that I had in North Carolina. So I started taking professional development courses, and lo and behold, I took Artificial Intelligence- because that was the one that scared me the most, and I thought, “I know the journey is fun”. The workshop had lots of explanations and was very accessible for anybody, regardless of where your skill set was. Also, we worked collaboratively and this is what I love. So then it was like..... now let's take this to the classroom.

At this point, I woke up and saw that I'd married computer science with world language.... and I don't even remember really dating. I couldn't separate the two all of the sudden, but I realized they were always there together I just didn't give it a label, I didn't know. And so that was how it all began.

What are some challenges in bringing computer science into your subject area?

Some of the challenges that I had were being the only French teacher in the group back in North Carolina, which made the collaborative aspect less fulfilling than if there had been others there who taught the same subject area. That changed again after my professional development experience with AI last year. There's still not a lot of people who have that interest, so the challenge has been trying to spark that. I keep in mind that I did not enter this marriage through being courted by computer science; I was always focused on my discipline, French. So, I've used that to try to remember how to initiate a conversation through another discipline, and that's been successful- coming at it from a different subject area and then saying, "Guess what? what you did is, computer science, you didn't even know it!". Because that's how it got me; if you would have told me, 10 years ago "Kemba, let's add computer science," I would have said, "No, I don't even like e-mailing after five."

What are your current goals?

My goal right now is to share what I’m learning with my colleagues, and I believe that my challenge is making sure that my voice really communicates clearly and effectively to them because I think that they will be just as drawn in as I was as long as I can present my ideas to them clearly. This spring I’m going to co-facilitate a session on AI in Social Studies; I'm looking forward to that. Then this summer I'm going to be conducting a workshop on AI and World Languages. It’s so wonderful to have these opportunities for the Humanities and Computer Science. I'm looking forward to both of those experiences! I'm excited to see what different ideas the teachers bring about how we can shape this to reach an even larger audience. I'm looking forward to seeing what comes out of these workshops. I’m excited to see how Maryland becomes a leader in the community in connecting the humanities and computer science.

Something I am really interested in right now is to investigate the world of literary games (also called Transmedia Storytelling). They are like video games that tell a story, with animation, sound and interaction... kind of like a live “choose your own adventure” game. It engages the senses and the imagination with visual clues that go with the words and make it interesting to learn new language skills. It's not very popular for language learning yet, but there is fascinating potential. There are ready make games like Alice, (https://inanimatealice.com/) and there are simpler options that anyone can take and adapt, like a choose your own adventure game in Scratch.