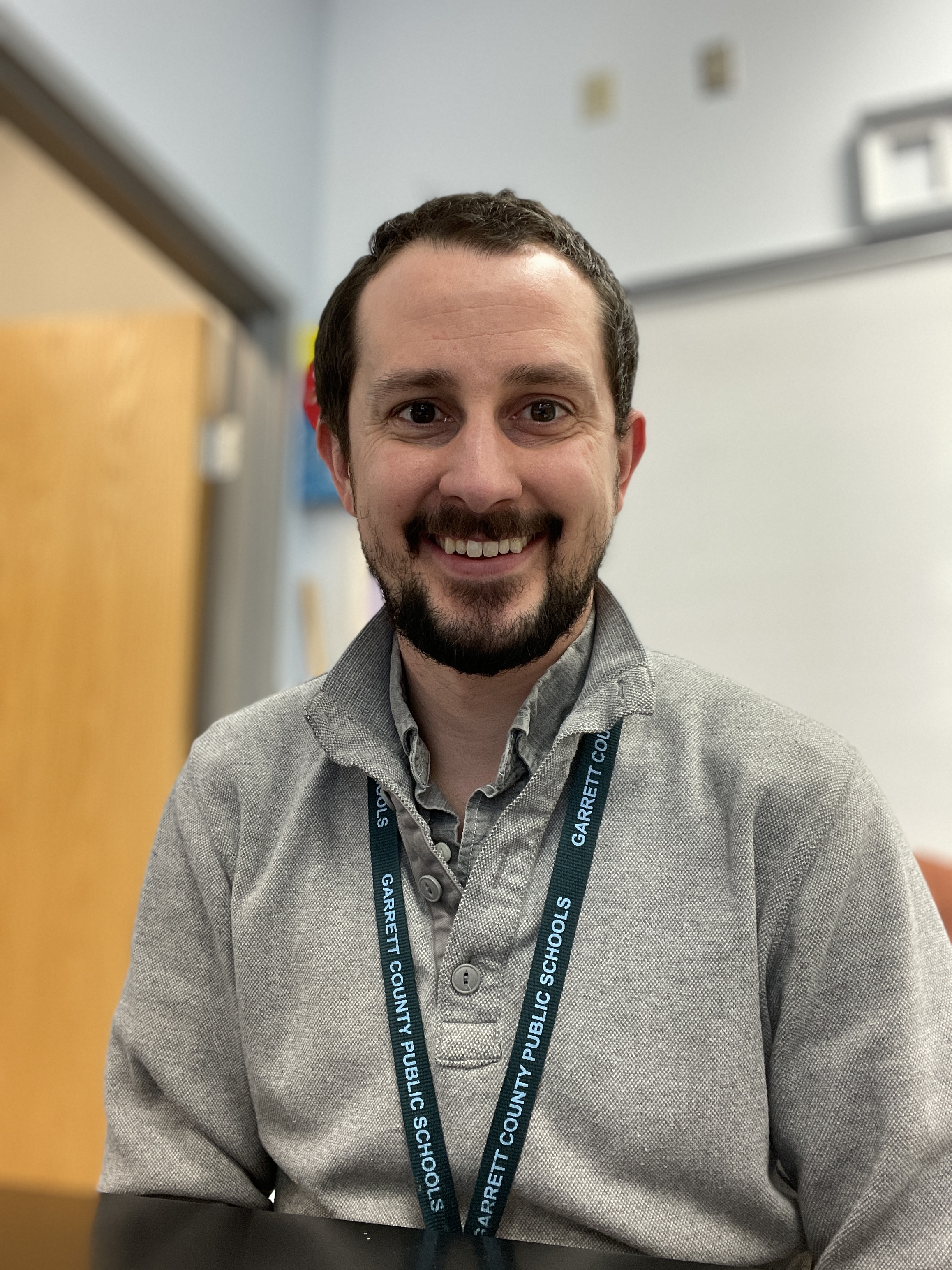 How did you end up in CS education?

I got into CS education by default. It was in my blood, my father is an educator. He started out as a math teacher and taught computer science as well, so I was born into it and started coding from the time that I could type. Dad always likes to joke that I was one of the only fifth graders on the planet that could code as well as a professional coder at the time, so it was an interesting upbringing. My younger brother and I both have degrees in education.

I started my education career in a math classroom. I taught at a private alternative school for boys, which was pretty challenging. We were a very small school. But I got to integrate computer science into the math classroom there- utilizing Scratch, building coding skills, writing algorithms to make geometric shapes- incorporating as much of it as possible.

Then in 2016, I joined the Garrett County Public Schools team as a STEM teacher at Southern High School where I taught computer science, mostly ninth grade computer science classes. I also got to teach some AP computer science classes there, which were super fun. I loved teaching AP CS Principles; that curriculum had some of the coolest activities. The rest is history; I spent four years at the high school level, now I'm in my second year at the middle school level, teaching Engineering and CS every day. I love it! I'm also facilitating and leading workshops to help our other teachers. That's been a super cool and kind of surreal experience, because I still feel like I'm this kid up in the Western Park mountains in Maryland, but now I'm getting to share my experiences in computational thinking with other teachers.

I've worked really hard to build a culture of computational thinking and problem solving, of being creative. My favorite quote is a quote from Steve Jobs that turned into Apple's tagline: "Think different". I'm always encouraging that in my classroom- thinking outside of the box, being creative, using CT and CS skills to solve problems effectively. It's something that I'm really proud of in my classroom, and it's seeped over into other classrooms. My students are really excited about how we solve problems, and every day we're using those skills to further our education, to further what we know and how we use what we know using wisdom and and what we actually know. So that's super cool. I've loved being able to share my experiences with other teachers around Maryland, and I look forward to continuing doing it.

Sometimes people refer to Garrett County as the Shining Start of Technology in the West. Why is that?

Our county has a very big First Robotics program and we're very, very blessed to have the support in our community and in the Appalachian region that we do. We're all about telling our story and sharing our vision. I think my vision for the future is to be able to share stories from my classroom that are huge successes and also huge failures, because that's how we spread a vision- by sharing stories. I think that that's not just for our First Robotics program; that's for life. It's a communication principle to share your story, and when you share your vision you influence the people around you. They're going to see your passion in your story and understand that this is something that they can grasp. I want to be on this ride, I want to see my students do this; I want to see them sharing more stories, more victory, more defeat. I want more access and conversation and access TO conversation, to be able to build CS and CT in Maryland and the Appalachian region.

My father laid the foundation for that; not everybody can do that. I often think a lot of young men want to follow in their father's footsteps, but I don't know if they have the opportunity to kind of think about what their dads have done. But when I begin to think about it, who my Dad is, and how he's impacted our region, is huge. He's had one heck of a career, and he should have the greatest reward; he truly is my hero, and I'm glad that out of all the humans in the world, I'm most like him, and it's super cool to be the son of such an awesome person. 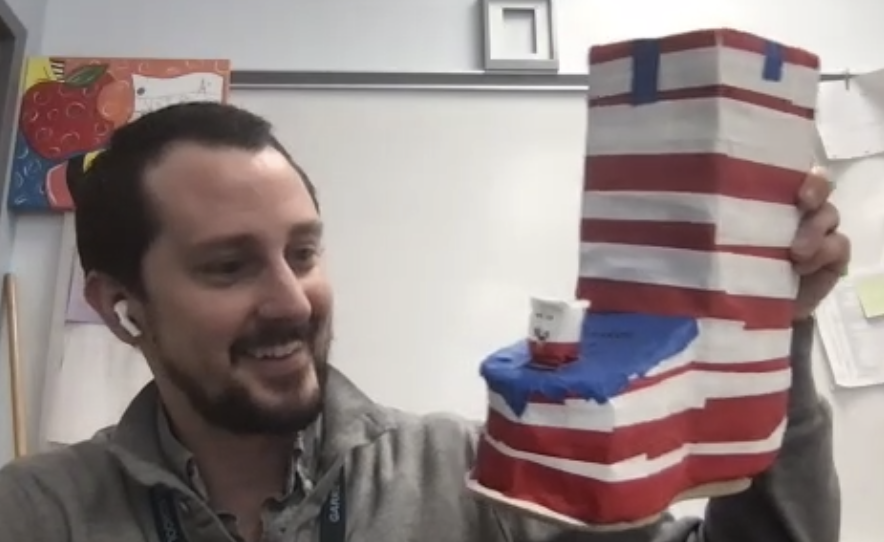 A story I always share on one of the first days of seventh grade is an activity to build some hype about the class and get everybody starting on a really cool note. The class is all about design and modeling, and they have to build these foot orthoses- that's a kind of medical boot- and they get super creative with it. There are specific design requirements but there's also all kinds of things kids can be creative about. I think it was in my second year of teaching at Southern High, I was helping a biomedical engineering student who had broken her foot and was in a a foot orthosis device, or medical boot, or whatever you want to call it, and the physical therapist said, "You can only put 40% of your weight on this." And so, of course, the student was wondering "Well, how do I even know what that is?" So with my help, she actually developed a boot that could tell you what percent of your weight it was holding. We took a boot and routed out areas for wiring; this was all her, I was just helping. She got the idea to buy a fancy digital scale, deconstruct it and put the inside in, and then we powered it all with an arduino. It had a little screen on the toe, and you could input your actual body weight and it would tell you how much weight, in pounds and percentage, was on it at any given time, and then she actually got a patent! That was a super cool experience for me to be a part of as a young teacher in a CS environment; I couldn't believe that she did it.

Some of my biggest wins have been with students that I don't even have in a class on a day-to-day basis. Students will ask for help to do something with a really cool idea for another class; if they have an idea, I'll say "Yeah, sure, come by at the end of the day and we'll work on it," and seeing their minds take CS into a very applicable environment for their own life has been really, really neat. I had one student who loved to play guitar hero, but the remote guitar for their playstation broke, so they couldn't anymore. In one of my classes, they had the ability to create something. The guitar that he made is hanging right there on my board; I kept it. He made it here and programmed an entire game, including different levels and lots of different songs. It really was super cool; he made his own Guitar Hero. We worked a lot of hours on it after school to get it to be how he wanted it. He was a very, very driven student. Nothing short of perfection was good enough! But he did it, and it was really cool to just see his mind turn. That's what feeds what I do; I love to see the light bulbs, the "aha" moments, just the joy in their faces whenever it's super successful.

But sometimes it's not successful, and to see that defeat is a bummer. I'd say "Well, you learn just as much if not more from your failures as you do from your successes''. So I try to prepare my students for that, because not every idea is gonna work. The challenges that come with all the ups and downs of "Oh, it's working! Oh, it's not. It's working now, but what was wrong? Better debug." It's hard to see the students struggle with it sometimes, especially when you don't want to force feed them the answer. But that's the struggle! Letting them take responsibility for their own learning, because I'm a big believer that they have to take that responsibility in their own hands. I'm here to facilitate their learning; I'm here to teach them everything that I know. What really matters in this classroom is what you do with those resources, so what are you gonna do? But you gotta let them do it by themselves, and it's tough sometimes, and frustrating. I go home and tell my wife, "Oh, we're on day three and this kid is still just stuck in the same circle,'' and she'll say, "Just have some patience with them!" Patience pays off, because they get it. There's so much value in going through that productive struggle in a project; the same value as someone grasping the content the first go around.  As a teacher I had to learn that not every kid learns the same way, and that was hard at first. I've gotten pretty good at it now- I at least i'd like to think so- but I would say in teaching CS, that was my biggest struggle. I had to learn about different learning styles the hard way, because my bachelor's degree isn't in education; I had a passion change right out of college. My master's is in education, but I started teaching first and then got my master's in the process, so there was a lot that my degree didn't prepare me for and I had to learn on the fly as I moved into teaching. But I really enjoy it, and I know I get better and better each year!