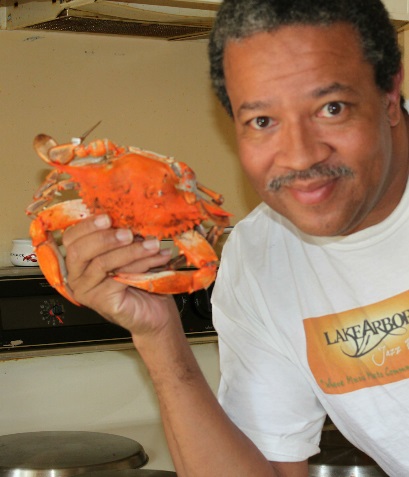 How did you get into computer science education?

My children went to PG County public schools. Being from an engineering background, I loved math, so I ended up volunteering to do a lot of math and engineering events and coaching in the schools. I used to run a business that provided closed caption equipment for analog TV, but the equipment became obsolete with digital TV; so I completed the resident teacher program where you study over the summer and then go into the classroom. I was originally thinking of teaching math, but when they saw my background they asked if I'd teach technology education. There's a lot more fun and flexibility in that area because it's not a core content area and I have the freedom to bring up interesting current events in technology as they arise. It's like choosing from a bunch of different baskets, and it's been great! Over time the county moved to to doing coding and using Code.org. I participated in the Praxis study program, and even though my programming experience was a bit out of date with programming languages that aren't used much any more, it was mostly familiar to me with my programming background in business. There were some topics on the exam that were very unfamiliar, so I studied and I passed the exam and earned my endorsement as a computer science teacher. Now we're one of the few schools doing Computer Science Discoveries with the Amazon STEM program. It's been a good journey from technology into computer science and I haven't looked back.

What have you discovered as a computer science teacher?

Last year, in my 6th year of teaching, I had an ephihany. I was under the impression that I was in the classroom to teach kids how to program and to understand the inner working of computers and computer programs. But it dawned on me that the real job is to get them interested in computers. In middle school I feel accomplished If I can set a spark, and get a fire going,  so that they will think about learning more about technology and computers. Once they get excited about programming, they don't need to become a programmer. Some people like dancing, some like painting, some like programming... if it's not for you, you can still pass the course if you do the work.. and you might be surprised that you start to like this and, if so, you're set for life.

In college we programmed in Fortran, Algol, assembly language, and C. We asked the professor if there was a programming manual and he said "Oh, it's just another programming language, you can pick it up!" Once my students have some experience with the foundations of computing, they have what they need to pick up new things as they come along.

What is going well in your work as a computer science teacher?

Something that has been really satisfying is working with the MCCE team as a facilitator to support teachers across the state in the Praxis study program. I get to help teachers get their certification and pass the Praxis exam. We all learn from each other and there is great cameraderie! We enjoy each others' humor and there is joy in being among kindred spirits in doing work that you love. I remember during one class where we were discussing IP addresses (the numeric address that uniquely identifies something on the internet... kind of like a house address) and my co-facilitator, Nick, blurted out the IP addresses for Google as an example (8.8. 8.8.  and 8.8. 4.4). Now who would know that?! I tell my class that "nerd" is not a bad word, be happy if someone calls you a nerd or a geek! It means that you know things that other people don't understand and that can be a real advantage.